HOME > Things to Do > Kyogamisaki Lighthouse

Kyogamisaki Lighthouse stands on top of a cliff 148 meters above sea level at the most northern point of the Tango Peninsula. Its chalk white color stands in stark contrast to the blue sky and sea.

The lighthouse was built in 1898, and is one of five first-order lighthouses in Japan which use a rare Fresnel lens.

There is a promenade from the Kyogamisaki Cape parking lot, which takes about 20 minutes on foot to reach the lighthouse.

In 2008 it was designated an important part of Japan’s modern industrial heritage, and in 2018 it became a member of the “Romantic Lighthouse Project“. 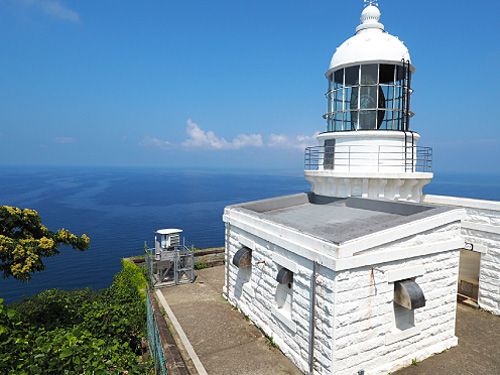 The vivid contrast between the crisp, white lighthouse and the deep blue ocean makes for a photogenic view of the lighthouse on a steep cliff looming over the Sea of Japan.