Omiya is the southernmost part of Kyotango. It connects to the rail network and express way to Kyoto and Osaka. For a lot of people it will be their first impression of Kyotango.

The temples and shrines of Omiya tend to be a little more out of the way, except for one shrine, which might be the largest in Kyotango.

Located down a narrow forest road, this temple is one you don’t find unless your looking for it. This forested setting is perfect for getting away from the the busy town. There are also some nature walks in the area too, to tempt you further into the woods.

Iwaya-dera Temple was founded by the Bodhisattva Gyoki in 726. This was the same priest who would go on to found the Nyoji and Honganji Temples in Kumihama. Iwaya-dera Temple has been occupied continuously since it’s foundation.

The temple interior is fairly simple but there are a couple of nice statues. The carvings on the main building caught me by surprise, especially the detail on the dragon carving is quite impressive.

Wakamiya Shrine is close to Iwaya-dera Temple, but the torii gate is visible from the main road. The road approaching it is very narrow, and crossed by the train line.

The Shrine itself has a large enough area for events to be held, and the abundance of trees makes it a great place to listen to nature. Unfortunately vehicles passing on the main road do dampen the audio aesthetic a little.

The fountain for washing your hands, something you’re supposed to do at all shrines when you enter, features a dragon, which I hadn’t seen before. It adds a lot of character to an otherwise mundane task.

The grounds features several sakaki, a native Japanese tree sacred to the Shinto faith, and momiji, Japanese maples, which are just starting to change colour for the autumn. They are placed up the hill leading to the main shrine. At the top of the stairs are the Komainu (guardian dog) statues. They seemed slightly more intense than a lot of other shrines.

These two shrines are right next to each other and from the road they don’t look like much. However once you get in front of them they are quite a lovely pair of shrines. The lanterns on Misaka Shrine are surprisingly detailed, so often the closed sides are just a plain finish but it was nice to see some sculpting detail on them.

Inari Shrines are very common in Japan and can be distinguished by their red torii gates, and fox statues. Inari is the god of the harvest and general prosperity, and foxes do their bidding. Hishio-inari Shrine’s name refers to a great tsunami that happened a long time ago. The tsunami rushed across the land and came to an abrupt stop at the foot of the shrine. So the people named the shrine Hishio “draining the salt”.

The shrines are on the south side of the same hill as the Centrale Hotel in Omiya. This gives them a great view out over the village nearby and the hills and trees that follow.

There are some trails in the area if you want to enjoy a short jaunt in nature. And a jungle gym if your traveling with small children.

Next in Omiya’s Shrines and Temples is not technically a temple. However, this statue of the Bodhisattva Jizo it is still important to the local Buddhist history.

While there are a lot of smaller statues of Jizo all over Japan. This one, however, is much taller than the more common ones. The name Heiji could be translated as “level ground”, but given it’s location, the a narrow mountain pass, and its history I think “peaceful ground” would be a better explanation.

There are various theories about why it was built here, some sources claim it was built by alms donated by travelers praying for protection from bandits. Other sources suggest it was built as a prayer for peace after a farmers revolt in the area.

The road passes by quite close to the statue grounds, but it is not the main road, at least not anymore, so it is still quite a peaceful place to visit. There is a small patch of greenery just before you get to the statue, the path curves gently around some shrubbery and stones.

The statue itself very impressive at a total of 5 meters tall it would feel quite imposing. But something in the natural setting lends a sense of calm and peace to it.

I also didn’t see any bandits.

It isn’t exactly clear when Omiyame Shrine was established, but the archeological evidence suggests quite a long history. There is evidence that there has been a settlement on this site since the Yayoi period (300BCE-300CE) and evidence it was used as a ritual site since the Kofun period (250-538CE). It appears to have been developed into a shrine in the Nara period (710-794CE).

The enshrinements have a very familial feel to them. They include the guardian deities of marriage, easy delivery, and perpetuation of one’s descendants. So if you’re looking to start a family anytime soon, you’d do well to pay a visit here first.

One of the most striking features of Omiyame Shrine is the long sando (the road approaching the shrine) it is 150 meters from the first torii gate to the top of the shrine. Lined with lanterns it looks especially impressive at night when they are all lit up.

The grounds itself are quite spacious allowing for large festivals to be held throughout the year. The lanterns positioned directly in front of the main shrine, with little shelters built over them, have been designated culturally important properties.

Entering the main grounds there is a pond with some koi fish in it, it’s a pleasant place to stop and wait for a moment. There are fortunes for sale at the main shrine. You can buy the wooden ones and write your own wishes on them or get one of the “lucky dip” fortunes. They are folded into cute birds and you can hang them on a small frame near the fish pond.

To the side of the grounds is a building with some paintings on display. One of them was still in relatively good condition, but the others were very faded, to the point it was difficult to make out anything other than vague shapes.

Omiya’s shrines and temples are a diverse bunch, but they all have their draws; whether it’s an impressively long lantern lit approach, a giant stone statue, or ferocious looking guardians. As always there are lots more shrines and temples in Omiya to discover, who knows what wonders they hold. 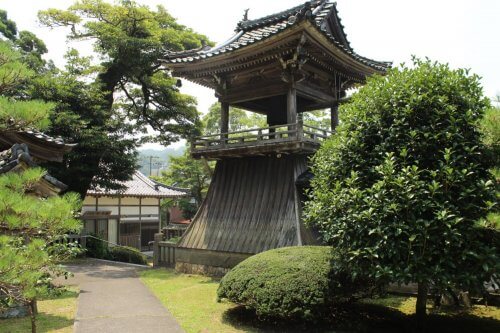