This autumn Yuhigaura held several magic hour nights. At the beach there was a candle light illumination, sake festival, food and fireworks. A few people could also sign up for sunset SUP and guided E-bike tours.

The E-bike tours were organized by Yasumi-san from Tango Experience (Japanese language). They provide bike tours around parts of Kyotango, or E-bike rental if you want to explore by yourself. The tour started at 2 pm from Yuhigaura Kitsu Onsen Station. We had a brief bicycle safety lesson, fitted our helmets and were off.

At 2 pm on a Sunday the roads weren’t too busy so it was pretty easy getting around. We took the old coast road towards Goshiki Hama (5 color beach), but stopped at the small fishing village, Shioe, on the way. From the hill we stopped at we could see down to the harbor. There is also a foot trail following very close to the coastline forming part of the San’in Kaigan Geotrail.

The road to Goshiki Hama is quite steep but the view is so dramatic that it’s worth stopping on the way down. There is a generous car park at the bottom, and then it’s a short walk to the rock pools. In mid-autumn the sea is getting a little choppy so you don’t want to get into the water, but you can get quite close. Yasumi-san told me that in the summer this is a great place to spend the afternoon with children looking in the rock pools for little fish, crabs and the like.

It’s also a popular line fishing spot. On any given day your sure to see 1 or 2 people out fishing.

A little bit away from the rock pools were some open fields and gazebo. They would be good spots for picnics, just watch out for animal droppings before you set up.

I was riding the PAS BABBY with one child seat at the back and a basket at the front. The child seat felt very secure, the side panels come up to head level it has a five-point harness and of course we both wore helmets as well. The side and back panels are adjustable for taller children too, up to about the age they enter school.

With the extra weight of a child on the back I was glad of the electric assist. It kicks in when you start to pedal and has 3 assist levels and 3 gears. I only used the highest assist level once, when climbing the hill out of Goshiki Hama, and I was still on the middle gear.

Yasumi-san had a more regularly proportioned e-bike. It’s slim tires more suitable for road, and smooth trails. If you don’t have the need of a child seat or basket I’d probably recommend one of these.

On the way back to Yuhigaura we took a detour to find a secret shrine. It was down a long dirt track, if I didn’t have a guide with me I probably would have given up about half way. At the shrine there is a long flight of stairs which go down to Shioe village; I think the dirt track is the faster way to get to it.

At the shrine we met a man who was taking care of the grounds. He told us about a festival held in March between the village and the shrine. Basically, some local men run out from the harbor and up to the shrine carrying a mikoshi (portable shrine) to show their strength. Men are certainly strange creatures no matter where they’re from.

When we got back to Yuhigaura we visited Kyotango 135 east where the owner showed us the Chirimen Silk workshop next to his surf shop. He explained how the machines work, and then showed some of the examples of chirimen that can be produced, and how the patterns are designed.

The view from his surf shop is incredible, with large glass doors looking out over the beach. From here you can rent surfboards and SUP (stand-up paddle) boards in the summer and into the autumn, depending on the weather. He also organized the sunset SUP where the boards have LED lights on them, but more on that later.

Included in the tour was a local sweet. Next to some larger souvenir shops there is a small kiosk which specializes in baked satsumaimo (sweet potatoes). I had the satsumaimo parfait, the combination of hot baked potato and cold, local ice cream was delicious.

Back at the beach it was just about time for the magic hour to begin. We were given an LED candle in a plastic ball which we could place anywhere outside the marked path. There were quite a few people placing them it was nice to feel like we were contributing to the magic.

The candles were centered around “Yurari” the beach swing. A lot of people were taking pictures on the beach swing with the sun setting in the background. The line for pictures seemed to grow as the sun set lower and even after it set, when the candles had their time to shine.

Along the sunset path was the 2020 Sake Fest and stalls set out by local restaurants. Some tables had been placed just on the edge of the beach, well spaced out, for people to eat and drink at. To elevate the magical atmosphere there was a DJ playing a range of music that would have near universal appeal.

The Magic Hour event also unveiled the start of the Sunset SUP (stand-up-paddle) activity. It is timed to coincide with the sunset, allowing a unique perspective to a daily occurrence. The boards have waterproof LED lights strapped to the underside, giving them a magical glow.

From the shore it was nice to see multicolored silhouettes gliding across the water. For the surfers it was really exciting to be surrounded by the gentle glow. And seeing the underwater features lit up by a changing cascade of colors made it seem like a magical world.

Once the sun was well set it was time for the grand finale. Fireworks had been set up near the shore a short distance from the field of candles. I’d never seen fireworks so close before, it was a thrill to see them popping just overhead.

The magic hour was a big success. While a lot of people did attend, there was enough room on the beach for small groups to leave plenty of space in between. In a year where holding events has been difficult to impossible it was nice to attend such a well organized outdoors event. 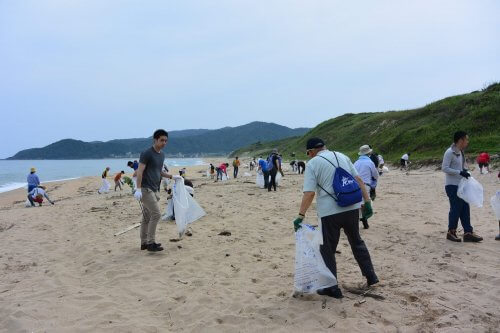